Three prominent Hong Kong student leaders have been charged over their roles in the pro-democracy “Umbrella Movement” of 2014.

Joshua Wong, Nathan Law and Alex Chow are accused of climbing a fence to break into a government compound at the start of the demonstrations.

Mr Wong, 18, has said he did not do anything illegal.

At the height of the movement, tens of thousands of people were occupying major streets demanding fully free elections for the territory’s next leader, after Beijing said it would vet potential candidates. 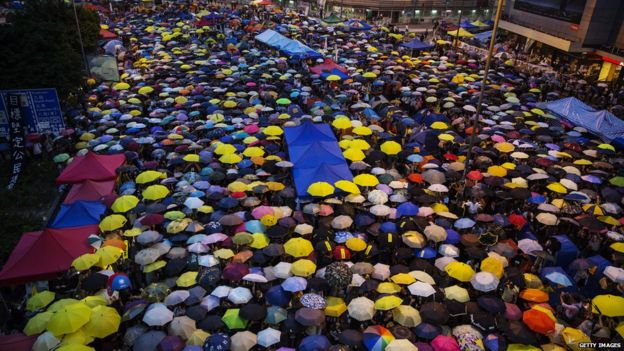 The three students were among a large group of people who stormed the fenced-off Civic Square inside a government compound on 26 September, as an act of protest.

Images of the students being forcibly removed from the square by police, and other subsequent allegations of abuse of force by police, invigorated the protest movement.

Mr Chow has now been charged with taking part in an illegal assembly and Mr Law with inciting others to take part, while Mr Wong, leader of the Scholarism movement, faces both charges.

Mr Wong could be jailed for up to five years, but said he would not regret his actions and that it was a “political prosecution”.

He said the break-in was “the best decision I have made within the four years I have been involved in the social movement and student movement”.